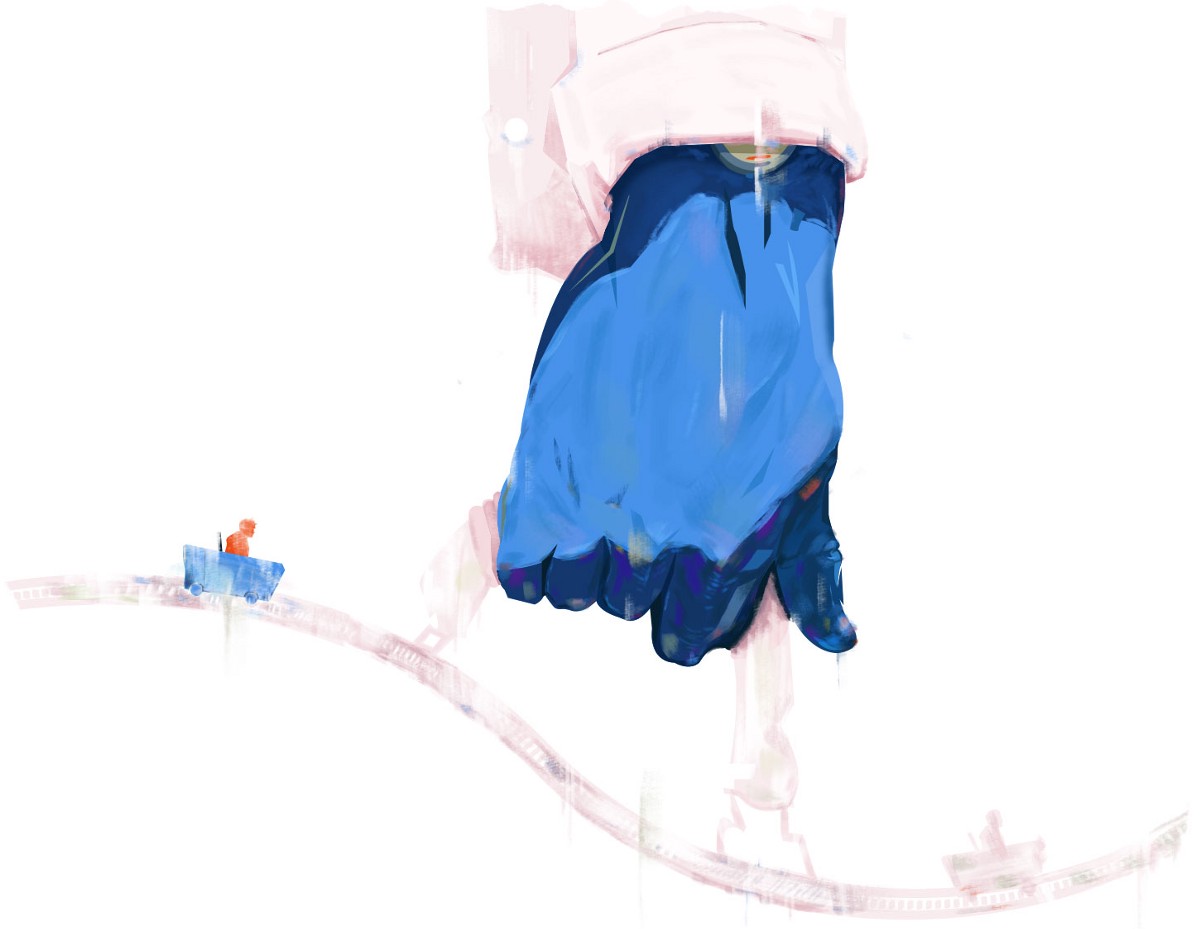 Well-meaning friends and colleagues are all quick to warn freelancers about the roller-coaster life of working without a traditional salary, established benefits, or a 9–5 job. This fear of the peaks and valleys (more so of the valleys) has kept many of my friends in careers about which they’re no longer passionate.

As an independent designer and studio owner, I have been warned about the “roller-coaster effect” many times, but I always felt that I was somehow immune to it after years of creating my own direction. I figured that I could avoid the valleys and drops by just working harder to keep them from coming. As I constantly focused on the company and clients, I slowly let other pieces of my life fall to the wayside. My valley wasn’t the traditional money and project dips, it was more personal and it came from not realizing that the freelance roller coaster isn’t just about the work.

While I have freelanced off-and-on throughout my career, this August marked two years since my last job of working for someone else. In the first year, I designed as a freelancer with a variety of smaller companies. Towards the end of 2014, I met my partner, Jamie Emerson, and started a design agency in Boulder called Emerson Stone.

I loved my life while freelancing — in the first year of being independent, I made money, traveled around Europe and Central America, and spent time with my wife — but I wasn’t really fulfilled by the work I was creating. On smaller projects, timelines and scopes weren’t large enough to create exactly what I wanted, and on larger projects, I had too small of a voice to steer the overall direction. While those worries aren’t the case for everyone, it was enough motivation for me to dream of something bigger. I wanted to build a company that worked on every facet of a design project: research, identity, art direction, interfaces, and development to bring it to life. My background in interface design and art direction with Jamie’s expertise in engineering and UX research combined to foster the development of a full-fledged studio.

We started off our partnership with a series of great projects, becoming solvent within the first month, and setting up the company to start paying ourselves a salary. It felt like a natural extension of freelancing, but with the added benefit of seeing a best friend every day to talk about design minutiae. We had plans for the future, and started hiring on full-time designers and developers as our list of projects grew.

While the company was growing during the early months of 2015, I was spending less and less time at home or with my wife. Nights and weekends were in the office and vacations were cut short or abandoned altogether. I explained it away as the cost of building a company, and pointed to our revenues to show that everything was going well. The roller coaster wasn’t going to catch me.

I didn’t notice the changes at first, but it started to affect all of my relationships — most importantly with my wife. I rarely reached out to friends and family to catch up and avoided making any plans more than a few days out. “What have you been up to lately?” was the worst question at parties because all I had to answer with was a version of “work.” I could’ve mentioned a particular project or new hire that I was proud of, but that usually makes for a really one-dimensional conversation with people outside of the industry.

This myopic focus on work went on for about five months before I finally took stock of everything that was happening. I wasn’t spending time with people outside of work, my hobbies fell by the wayside, and I was quickly burning out. The “drop” wasn’t going to hit the company in money or projects, it was going to hit me in everything else.

I crashed in the beginning of September. The company was slammed with too much work, my wife’s and my new home was turning into the sequel for The Money Pit, and there were a couple health issues in the family. I could easily handle one of these problems, and maybe balance out two, but all three brought everything crashing down. I couldn’t sleep, I was racked with stress, my stomach with in constant knots, and I wanted nothing to do with my daily work. For the first time, my work was suffering in the same way that my personal life had been for the previous five months. I hit a wall and could no longer trade off more of my personal life for my work life.

The only thing I could do was talk it over with the two people who I affect the most in my daily life — my wife at home and my partner at work. I needed to shift priorities and goals, bring in more help at work, and figure out what I could do to mitigate a crash like this in the future. Looking back, I would not have recovered without both of them to help me through.

At home, my wife and I worked out a plan for my personal life going forward. Unlike the first half of the year, I was going to pull away from work for at least one day each week and spend time connecting with people I care about. After years of lightly teasing my friends who practiced, I was going to attend yoga classes in Boulder and get into a weekly routine. Finally, through proper diet and rest, I was going to focus on my health as much as I did the company’s health.

Back at the office, Jamie and I set up a plan for our work life because he was going through many of the same strains that I felt. We built up strict processes for working with new and recurring clients to ensure we were creating the right work at the right time. We created more realistic expectations and timelines for projects so we weren’t guaranteeing work that needed to be completed on nights and weekends. We also added a third partner to help us balance out the responsibilities and plans for the company. This last part was crucial because it created more balance and stability for Emerson Stone as the number of employees and projects has grown.

It’s been about two months since I felt everything come crashing down. Things have improved. I spent this Thanksgiving weekend away from all work, I see my wife and my friends more often, I watch some TV, and I’ve actually stuck with yoga. As I look back at what built up for September to happen, I feel like I can spot most of the events along the way. And while hindsight is 20/20, I’ve started to build a support system to ensure it doesn’t happen again in the same way.

There is always the chance that I’m just on a slow upward crawl with the roller coaster right now, another drop approaching. But this time, I’ve built in a number of cushions and emergency brakes to maybe soften the drop next time it comes around.

For now, I’ll keep my hands and head inside the ride at all times.

Please let me know what you’ve thought of this article or if you’ve gone through something similar building your own company or product. Thank you to Suzan Bond, who interviewed me for her upcoming book Bet on Yourself, and helped me to understand many of these issues by talking through them with her. Her book is going to be fantastic.

If you liked this article, let me know. You can find me on twitter.